We’ve all watched on TV people sight fishing for Bonefish and Permit along the flats located in and around the Florida Keys. Spotting fish and accurate casts are crucial. Well, there’s more than one way to catch those marauding saltwater game fish and I’ve got the proof.

Arranging a day’s charter should be simple, and it would be if I never bothered mentioning that I’m completely without sight. First and foremost, guides question how that’s going to work. Then there are the personal safety issues.

I’ve been told more than once my money was no good by guides simply unwilling to test the parameters of their insurance providers. I don’t take it personally because a rogue wave just might sweep me away, or I could fall off the dock, or I could stumble down a bank, or stick myself with a hook, or get bitten, stung or speared by a fish, etc., etc… So naturally, when I do come into contact with guides like Dave Denkers of Islamorada, a man who respects people who take chances that involve their own personal safety, I’m always thrilled and relieved.

The plan was for Dave to pick me up out front of the RV park where my family and I were staying. “Look for the guy with the white stick” I texted Dave the night before, to which he replied, “I’ll be driving a black Dodge” – a common rookie blind encounter mistake that happens more often than one might think (LOL).

At 7: a.m. the next morning I heard Dave’s SUV pull to the side of the road. I knew it was him by the sound of the empty boat trailer rattling along behind is truck. A quick hand shake and I piled in for a short ride to the marina. Five seconds of sighted guide technique instruction and I was safely on to the dock and seated in Dave’s 16-foot bay boat.

Dave was excited about the prospects for the day. Reconnaissance gathered from fellow guides led Dave to believe that the Tarpon would be on fire. I asked if this was based on reports from the day before, and Dave confirmed this to be the case. Both guides he had spoken with reported the Tarpon had been on fire. Now, I’m not a superstitious guy, and all that talk about “should have been here yesterday” stuff does nothing for me, but I did note the full moon eclipse the previous night and may have expressed some scepticism.

Sure enough, following a 30-minute cruise down the coast, weaving between islands and crossing sizeable bays, we arrived at the promised grounds. Unfortunately, all the Tarpon we spotted, and there were probably over two dozen, expressed not a flicker of interest in what was on offer. This being Pin fish drifted under floats using tidal currents and sand bars to our advantage.

After three hours our eagerness and anticipation were soon set aside along with my Tarpon float rod. We rolled up our sleeves and got down to the hard work of catching fish. We decided to switch it up and set off for a series of backwater bays.

Upon approaching our first bay Dave killed the motor and resumed poling from his elevated rear poling platform located over top of the boat’s outboard engine. We first had to cross over a set of what turned out to be astonishingly high breakers to enter the bay. I took my place at the ready on the front casting deck, but finding the rocking and pitching boat almost impossible to stand on, elected to stand in the cockpit instead. It was around that time when I heard Dave’s pole clank against the gunnel. “Dave, you O.K.”, I called back over the sound of the crashing waves that were now pouring over the bow? “I’m fine”, Dave replied, “I just fell out of the boat”.

Dave explained that while in mid push the boat dropped out from under his feet. His choices were to either attempt a landing on the pitching deck, or in the shallow water where there was less chance of him incurring an injury. Dave said that was the first time he ever fell out of the boat, and I have no reason not to believe him since it never happened again that day. It did make me pay more attention to my environment though, just in case it was going to be me poling Dave’s boat home alone. In reality however, the water was only three-feet deep and neither of us were ever in danger.

It wasn’t long after that Dave spotted a 20lb Permit feeding actively with its tail out of the water. Time after time I launched my shrimp in the direction and distance Dave instructed. The 40 mph winds weren’t helping though, with cast after cast being blown off course. Normally, I’m a relatively accurate caster with the ability to land lures within inches of the sound of surfacing fish. This time however, whether it was the wind or a communication breakdown, I’m not sure, the entire frustrating process seemed to have lasted for tens of minutes, but in reality was over within 90 seconds. O.K., try one and we were learning.

Opportunity number two came not long after. Dave spotted a Bonefish 30-feet off the stern on the down-wind side of the boat. We had agreed on a system by then. I would fire bullet casts just above the waves, and Dave would let me know when to stop the bait’s flat trajectory. By keeping my rod tip slightly elevated as the line tore through the guides, and then dropping the tip at the same time I stopped the cast, I was able to drop the bait quietly into the water and avoid startling the fish.

With directions from Dave such as “hold”, which meant not to reel, and “reel”, which meant draw the bait away from the fish to trigger a reaction, along with the various commands we adopted to target my casting, we began hooking up.

First fish over the gunnel was this pretty little Bonefish weighing in at around 3.5 lbs. I was blown away by the relatively small stature of this fish given the number of drag-pulling runs it was able to execute over the 3-4 minutes it took me to reel in. No wonder people fly all over the world to capture this species – they truly are athletes. Not a bone could I detect on its body however, which made me question why these fish were given such an unappetising name. Dave said the bones were all on the inside, and plenty of them. From what I could feel Bonefish were solid muscle.

Next to come over the gunnel was one of the most beautiful fish I’ve ever had the pleasure of holding. It was a 4 lb Permit fish and I was awful glad it permitted me to feel its amazing fins and tail. It’s also toothless which makes it even that much more inviting to hold.

Like the Bonefish, Permit too are capable of destroying drag systems on smaller spinning reels. After each fish was caught using 6 lb Power Pro line spooled on to a Shimano Sahara 2500 spinning reel, I had to carefully cast out the bait while at the same time pull line off the spool that had become impacted. I suggested Dave look into the Shimano reels that feature aerowrap technology designed specifically to prevent this from happening and to provide longer casting distances.

Aerowrap is one of those innovations Shimano has engineered that has put them well ahead of their competition. However, being the only reel manufacturer that has adopted this innovation, not many fishers know it even exists.

Later that day Dave introduced me to a deadstick method of fishing that might make many sceptical, but made a believer out of me. Once Dave had located some slightly turbid water generated by contrary currents coming into contact, he anchored the boat using an ingenious method of tying off to his 24-foot long pole that he first sunk into the soft bottom, and then bent over 90 degrees.

The method called for me to fire my shrimp attached to a 3/8 oz jig head onto a stretch of submerged white sand over 100-feet away next to the turbid water and flats grass. Keeping the line slightly slack, I was able to detect fish pick up my jig, and after a few exploratory nibbles, wolf down my bait at which time I would simply raise my rod tip while reeling down.

Using Dave’s dead stick method I was able to bring a third species into the boat – Bonnethead shark. The shark were between 3 and 4 feet in length, and while they weren’t able to provide near the fight of Bonefish or Permit, they were a welcome addition to my checklist of species captured and released.

Returning caught shark to the water is a 2-handed affair. One to hold their tail and the other the body just behind the head. Caution should be exercised to make sure sharks are released by both hands simultaneously. Shark are known to twist around 180 degrees and bite those who maintain a single grip on their tail.

Guides like Dave who spend good parts of entire days poling their sports around the flats of Florida definitely earn their pay. It’s hard work, not to mention the effects of the sun and salt water on the body. A big thanks to Dave for agreeing to take me out for the day, and to his wonderful wife who prepared for us the most amazing brownies – each chunk was the size of my fist.

We never were able to hook up a Tarpon in spite of our trying on three separate occasions that day. Too bad as it would have meant a grand slam in Florida. It was our goal at the beginning of the day, but by the end, we were feeling quite proud of what we had accomplished by working together. A true first for us both. 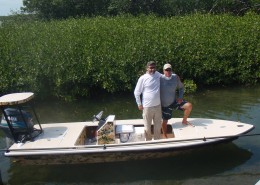 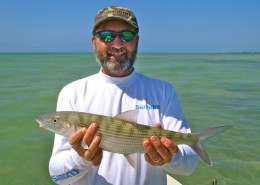 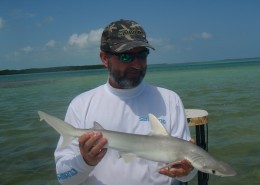 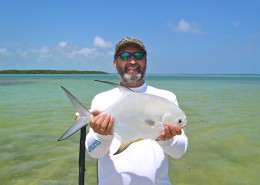